The Companies Act, 1956, fashioned after British corporate laws, was the principal edifice of corporate governance in India since 1956. The significant changes in the India financial sector and corporate sector in the wake of liberalization in the early 1990s called for changes in regulation of capital markets and better protection of investors. SEBI was set up in 1992 and the prevailing merit – based capital market was replaced by a disclosure based capital market. The CII released the Code of Corporate Governance in 1996. Following this, SEBI constituted two committees on corporate governance, the Kumaramangalam Birla Committee and the Narayana Murthy Committee. Based on the recommendations of these committees a slew of reform measures were introduced such as Clause 49 of the Listing Agreement board level reforms, disclosure of related party transactions, inclusion of a “Management and Discussion Analysis” section in the annual report, whistle blowers policy, and the certification of financial statements by the CEO and CFO.

Notwithstanding these reforms, a major corporate accounting scandal occurred at Satyam Computers, a leading IT company. In response, J.J. Irani committee was appointed to review the extant corporate law. The committee submitted its report in 2012. The Companies Act of 2013 was based largely from the proposals made by the J.J. Irani  committee. The important changes introduced in the Companies Act 2013 are:

In this research monograph, Equity Valuation : Science, Art, or Craft , published by the CFA Institute in 2017, Frank J. Fabozzi et. al investigate how analysts employed by acive investment managers firm their beliefs. For this purpose they interviewed analysts, portfolio managers, directors of research,  chief investment officers , and academics at a variety of firms and institutions  in Europe and North America.

Here are some important views and insights culled out from those interviews:

Brad Cornell of Caltech says that given corporate buybacks and other innovations, dividend discount models are less useful than they once were.

Security selection involves selecting particular securities from all securities in an asset class. It seeks to increase portfolio returns beyond the returns of strategic asset allocation by selecting securities are likely to outperform others in their asset class.

Strategic allocation is part of management of investors. It focuses of on the wants, goals, financial resources, risk tolerance, and investment horizon of the investor. It provides guidance for avoiding cognitive and emotional errors on the path of accomplishing wants and associated goals. Tactical asset allocation and security selection are parts of management of investments. They are concerned with increasing returns without increasing risk. Strategic allocation involves movements on the efficiency frontier, such as from portfolio A to portfolio B on frontier 1. 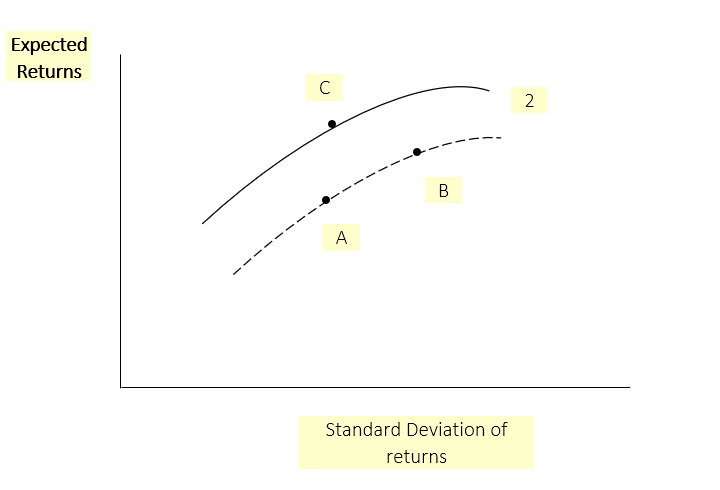 Take the case of pollution. We have learnt that by reducing pollution business can generate profit. Issue by issue it is now being realised that there is no conflict between social progress and economic efficiency in a fundamental sense. Here are some example: Heart Healthy Oils in the U.S has a  profitable operation while promoting healthy nutrition. Jain Irrigation in India is helping in saving water with its drip irrigation business which is a profitable activity. The social forestry project of ITC in India is an economically viable operation.

Addressing social issues with a viable business model, that can be scaled up and hence not constrained by resources, leads to creating shared value. Shared value  is capitalism of a higher kind:

Some time back, Fidelity Investments conducted a study in the U.S. to find out what kind of investor accounts enjoyed the best returns. They found that the highest returns were earned by investors who had completely forgotten about their investments for years, even decades- and a good proportion of these investors had died a long time back. The moral of the story is that as far as managing your portfolio is concerned, do exactly what a dead person would do. That is don’t do anything.

A conspicuous example of a passive strategy is an American fund named Voya Corporate Leaders Trust Fund, which has not made any changes to its holdings since its beginning. Started in 1935, its initial fund managers selected 30 stocks which in their judgment were the best companies of that time (Corporate Leaders) and invested equal amounts of money in the shares of each.

Barring the changes that have happened automatically on account of mergers and acquisitions, no deliberate change has been made to this mutual fund’s portfolio. Over a period of 82 years (1935- 2017), the Voya Fund has earned a return of 10.6%, per annum (about 3900 times) when the Dow. Jones Industrial Index earned only 6.7% per annum (about 200 times).

India International Exchange (India INX) is a subsidiary of BSE setup in 2017 in International Financial Services Centre (IFSC) in GIFT City, Gandhinagar, Gujarat. The main purpose of setting up the exchange is to bring the large offshore rupee markets back to India, make available a single exchange for global investors to invest in Indian securities without any currency risk, and to provide an easy platform for listing foreign currency securities. The exchange which at present is under the triple regulatory control of RBI, SEBI and IRDA is expected to shortly come under the single regulatory control of International Financial Services Centre Authority set up in 2019 to be the sole regulator for all IFSCs.

The median turnaround time of the exchange is 4 microseconds which reportedly is the fastest in the world. Trading in the exchange takes place for 22 hours a day, in two sessions, to cover all the global time zones. The first session is from 4.30 hours to 17 hours with settlement by 8 hours the next day and the second from 17.01/05 hours to 2.30 hours with settlement the same day by 16.30 hours. All prices and settlements are in US dollars. Any SEBI recognised intermediary permitted to operate in an IFSC can become a member of the exchange and provide services to: persons not resident in India, NRIs and resident Financial Institutions eligible under FEMA to remit funds abroad upto specified limits, or a resident Indian to the extent allowed under Liberalised Remittance Scheme. To make the exchange globally competitive, the charges levied are kept very low and the access formalities very simple. Also, for the trades done in the exchange there is no security transaction tax, commodity transaction tax, capital gains tax or GST.

At present the exchange offers for trade the following contracts: Futures and option contracts on S&P BSE SENSEX, S&P BSE SENSEX 50 (called India 50 Index) and on Indian single stocks. The contract periods are in three monthly cycles of near, next and far months. The products on commodities are futures and option contracts on Brent Crude, gold, silver, aluminium, copper, lead, nickel and zinc. The currency derivatives are futures and options on EUR/USD, GBP/USD, JPY/USD, INR/USD and USD/INR where three serial monthly contracts followed by three quarterly contracts are available. Out of all these contracts, at present, trading is confined to only futures and options on India 50 Index, gold and INR/USD. In the debt segment, Indian and foreign issuers can list bonds in Indian Rupee as well as foreign currency and the bonds will be available for trading through Bloomberg immediately upon listing. Besides foreign currency bonds, exotic bonds like Masala/ Green /Social/Sustainable bonds can also be listed. Some of the issuers of such bonds so far are ADB, Exim Bank, SBI, NTPC, REC, PFC, ONGC, Adani Ports and Yes Bank.

The volume of trading in India 50 Index derivatives is reported to be already comparable to that on the Singapore exchange and that in gold eight times that on the Dubai exchange. Forty seven billion US dollars have already been raised from listings in the exchange so far. The exchange has requested SEBI for permission to deal in REITs, InvITs and GDRs. It has tied up with global exchanges like CME and LME and has ambitious plans to eventually offer products on overseas listed securities, asset backed securities, convertible bonds, depository receipts and derivatives across all commodity classes.

Reliance Industries Limited's net debt stood at Rs.1,61,035 crore as on March 31, 2020, owing mainly to heavy investments in their traditional petrochemical sector and rolling out of new telecom/digital business under the Jio brand.  To allay any possible concerns among investors over the rising debt overhang, Mukesh Ambani, the Chairman had stated in the AGM in August 2019 that the company had a very clear roadmap to becoming a zero net debt company within 31st March, 2021. Well before the deadline set, the company was able to become net debt free by stake sale and a rights issue of equity shares. The unprecedented investment blitz   saw Reliance Jio alone raising about $20 billion from some global tech giants and financial investors, in just three months, as shown below: 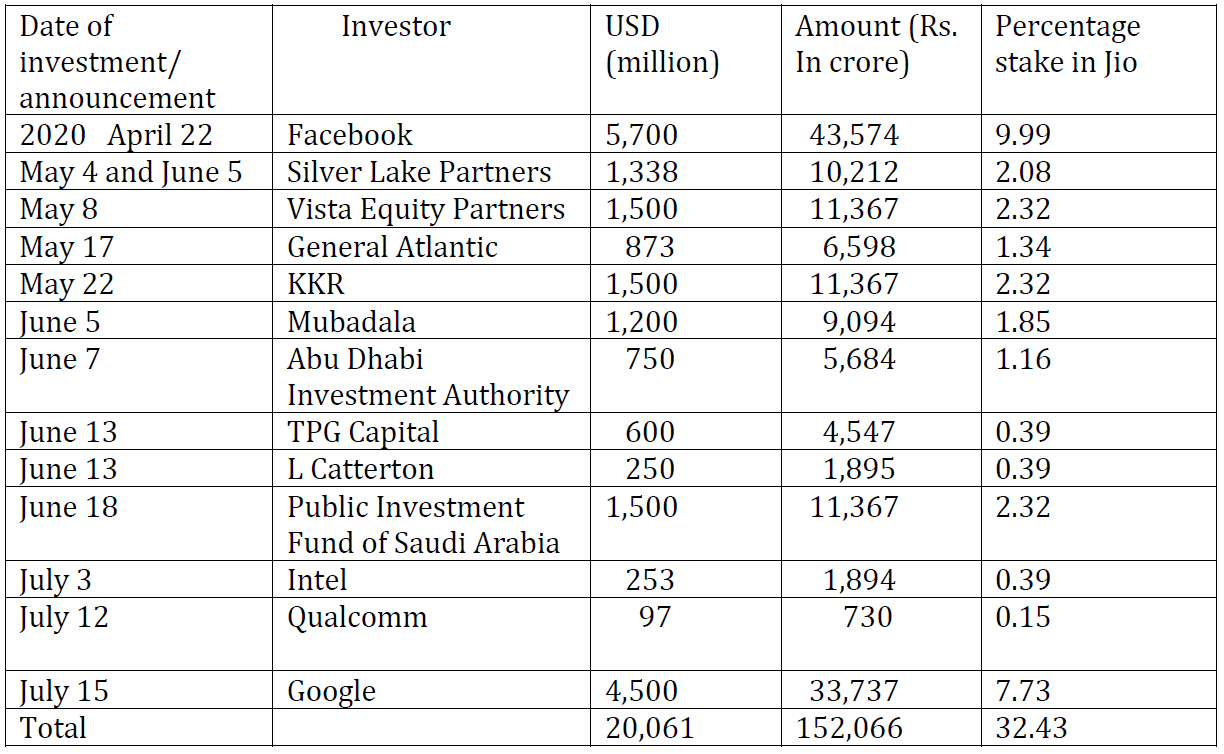 The mother said, “I am glad that you showed concern for a lady.”

The boy replied, “I was sitting on dad’s lap.”